Ash sat down with Spike Lee to talk cops, Kanye, and why an honest racist is better than a respectable liberal. BLACKkKkLANSMAN is in UK cinemas on 24th August. 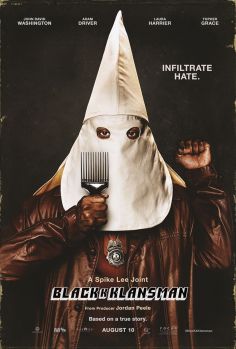 Would you rather be around someone who is open about their racist views, or someone who hides them? We all have prejudices against each other, but it is clearly a bigger issue when it becomes racist. Racism can put road blocks in your path, where simple prejudices can just piss you off….but you can get past it. I’d like to know that someone hates me so I can avoid them, and adjust my surroundings. Racism is such an old issue, i’m so annoyed that it’s taking us this long to realize how silly it is.

The film BLACKkKkLANSMAN shows us just how stupid racism is. How can you hate people you’ve never met? We forget that everyone is an individual, and that allows us to be unpredictable. Human beings are not all the same. So to hate a group of people is telling them that they all share the same characteristics, which is not human. In some cultures, people pass on this ignorance to their children. We still divide each other in groups for crime stats , education, IQ score averages and voting. If we know that generalizing is wrong, why do we still have these separations dividing us in government programs?  The reason is, our world is still stuck on low level thinking. We haven’t evolved as human beings and on earth, hate is more powerful than love.  Anyway, thats just my opinion on things….what’s yours?

Ash Sarkar is a writer, broadcaster, journalist and lecturer living in London. She is a Senior Editor at Novara Media, where her work focuses on race, gender, class and power. As part of her work, she has appeared on numerous panels, hosted live events, and interviewed frontbench politicians on everything from foreign policy to football opinions.

Ash regularly appears on television to discuss current affairs, and has featured on Sky News, Channel 4, Daily Politics and Newsnight. She has written on politics and pop culture extensively for both print and digital outlets.She lectures in Global Politics at Anglia Ruskin in Cambridge, and teaches a Masters in Film, Graphic Design and Propaganda at the Sandberg Instituut in Amsterdam.